Lycaon pictus (Latin for "painted wolf") is an apt name for the African Wild Dog. Their body is similar to that of a wolf but the ears are larger and more rounded: they help keep them cool and allow them to hear very well.. Each dog's marking is unique - splotches of black, pale yellow-brown, blonde and white. The muzzle is black and the tip of the tail is always white. The fur is short but shaggy and is a little longer at the end of the tail and around the throat. There is a dark stripe of fur on the forehead. Dogs vary in size from 35 lbs to 70 lbs and stand about 24 inches at the shoulder. They have four digits on each foot and are extremely lean, muscular animals with long slender legs.

Once common in all areas of Africa, except rain forest and deserts, African Wild Dogs are extinct or nearly extinct in nearly 32 countries of their former range, and the remaining populations are too small to remain viable. Of the six countries where they still exist, only three (Botswana, Tanzania and South Africa) have populations of more than 300 dogs.

The “official” collective noun is a pack of African Wild Dogs, but really don’t you think a palette is much better one?

You can learn more about my workshops online at www.wildlifeworkshops.com.
© 2021 Jeff Wendorff. All Rights Reserved. 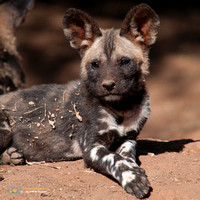 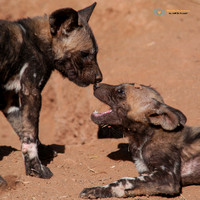 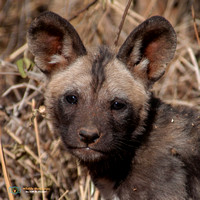