The Canada Lynx or Canadian lynx is a North American mammal of the cat family, Felidae. It is a close relative of the Eurasian Lynx (Lynx lynx). However, in some characteristics the Canada lynx is more like the bobcat (Lynx rufus) than the Eurasian Lynx. With the recognized subspecies, it ranges across Canada and into Alaska as well as some parts of the northern United States.

With a dense silvery-brown coat, ruffed face and tufted ears, the Canada Lynx resembles the other species of the mid-sized Lynx genus. It is larger than the bobcat, with which it shares parts of its range, and over twice the size of the domestic cat.

Both species of lynx are species that we photograph on my wildlife photography workshops. You can learn more about my workshops online at www.wildlifeworkshops.com.
© 2021 Jeff Wendorff. All Rights Reserved. 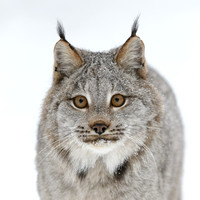