The turkey is one of the first birds that most of us know, either from the holiday table or those handprint turkey's we made for our parents in kindergarten. They are pretty amazing and when the light hits them just right, quite beautiful.

Franklin is miss-quoted about advocating the turkey as the National Bird. The National Franklin Institute says; "he was against the Bald Eagle, stating in a letter to his daughter that it was a “Bird of bad moral Character” whereas the turkey was a “much more respectable Bird… a Bird of Courage.”

Turkey's have a long tradition of presidential pardons during the White House Thanksgiving meal, going all the way back to Abraham Lincoln. It was not an official thing though until 1989 with President Bush.

Turkeys are very fast flyers, 60mph, and they roost in treetops at night.

The Collective noun for a group of turkeys is a "flock" or a "rafter". Faithful readers of my photography blog, www.jeffwendorff.com, know that I advocate the far more evocative word, a "gobble." Adult males are Toms; females are hens and babies are poults.

There are six recognized subspecies of the Wild Turkey: Eastern, Osceola,(aka Florida), Rio Grande, Merriam’s, Gould’s and Ocellated. The Eastern is the most prevalent and are found in 38 states mostly east of the Mississippi River. They are difficult to tell apart, so it is best to consult a distribution map.

I offer one workshop that has an excellent chance to photograph these amazing birds and that's in Green Valley, AZ. Check out my website www.wildifeworkshops.com for more details.
© 2021 Jeff Wendorff. All Rights Reserved. 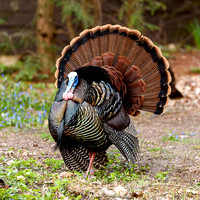 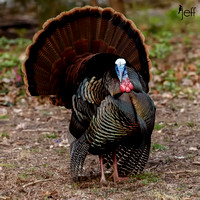