Weaver Birds & Widowbirds Wiki
The Ploceidae, or weavers, are small passerine birds related to the finches.

Weavers and Widowbirds are seed-eating birds with rounded conical bills, most of which are from Sub-Saharan Africa, with fewer species in tropical Asia. The weaver group includes the buffalo, sparrow, typical, and widow weavers. The males of many species are brightly colored, usually in red or yellow and black. Some species show variation in color only in the breeding season.

Weaver birds, also known as weaver finches, get their name because of their elaborately woven nests (the most elaborate of any birds'), though some are notable for their selective parasitic nesting habits. The nests vary in size, shape, the material used, and construction techniques from species to species. Materials used for building nests include fine leaf fibers, grass, and twigs. Many species weave very fine nests using thin strands of leaf fiber, though some, like the buffalo-weavers, build massive untidy stick nests in their colonies, which may have spherical woven nests within. The sparrow weavers of Africa build apartment-house nests, in which 100 to 300 pairs have separate flask-shaped chambers entered by tubes at the bottom. Most species weave nests that have narrow entrances, facing downward.

Many weaver species are gregarious and breed colonially. The birds build their nests together for protection, often several to a branch. Usually, the male birds weave the nests and use them as a form of display to lure prospective females.

Collective Noun Weavers and Widowbirds
There also does not appear to be a collective noun for the weavers, so I've named them a Spindle. A spindle of weavers has a nice ring to it!

I could not find a collective noun for widowbirds and have proclaimed a group of widowbirds will be called a bereavement.

Photography Workshops and Tours
If wildlife and nature photography is your thing, I have a cool thing for you! I lead photography workshops around the world, and many of them either feature birds or have an active bird photography element. Check out my website, Wildlife Workshops for details. 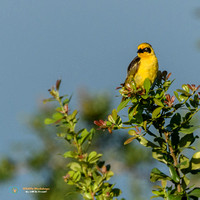