Jeff Wendorff's photography portfolio of Verdin from the family Remizidae.

About Penduline Tits
The Remizidae (pronounced rem-IZ-uh-dee), or penduline-tits, is a family composed of twelve species in four genera found in North America, Eurasia, and Africa.

North America has just one species of penduline-tit in one genus, the Verdin.

The Verdin is known for being one of the smallest of North American passerines. Less than five inches in length, this tiny, active bird often gets overlooked because of its small size. It's size is second only to the Bushtit (unrelated) as the smallest of the songbirds in North America.

The Verdin is a very small bird with medium length wings, a medium length tail, and fairly long legs. Like other insectivorous birds, it has a short, sharp, pointed beak.

There isn't an official collective noun for these wee birds, but there are a number of baudy options that I think I'll leave to your imagination. Because of their prolific nest building, I think that a Nest would be an appropriate noun.

If you are interested in Wildlife, Nature and Creative Photography Workshops check out Wildlife Workshops and see what I've got going on.
© 2021 Jeff Wendorff. All Rights Reserved. 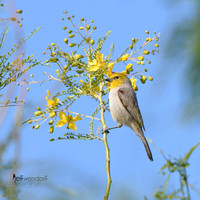