In order to try and simplify your search, I have moved several species to their own gallery, Robins - Turdidae. Same with Bluebirds - Tudidae, Catbirds - Turdidae

Thrush Wiki
The thrushes are a family, Turdidae, of passerine birds with a worldwide distribution. The family was once much larger before the subfamily Saxicolinae, which includes the chats and robins, was split out and moved to the Old World flycatchers. The thrushes are small to medium-sized ground living birds that feed on insects, other invertebrates and fruit. A number of unrelated species around the world have been named after thrushes due to their similarity to birds in this family.

They are insectivorous, but most species also eat worms, land snails, and fruit. Many species are permanently resident in warm climates, while others migrate to higher latitudes during summer, often over considerable distances.

The songs of some species, including members of the genera Catharus, Myadestes, Sialia and Turdus, are considered to be among the most beautiful in the avian world. 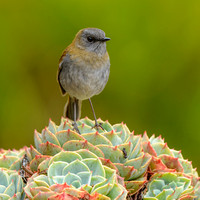