Sunbirds are basically the hummingbirds of the Old World.

They are small, slender passerines from the Old World, usually with downward-curved bills. Many are brightly coloured, often with iridescent feathers, particularly in the males. Many species also have especially long tail feathers. The sunbirds have counterparts in two very distantly related groups: the hummingbirds of the Americas and the honeyeaters of Australia.

My photography aviary of Sunbirds includes:


There is no official collective noun for the lovely Sunbirds, so I have chosen to name a group of Sunbirds, a Corona! No, not the beer one!

Join one of my African photo safaris and you just might add some images of these glorious birds to your portfolio. Check out Wildlife Workshops for details.
© 2021 Jeff Wendorff. All Rights Reserved. 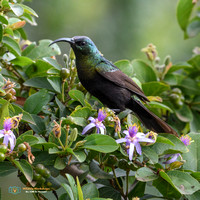