The Ostrich or Common Ostrich (Struthio camelus) is one of two species of flightless birds native to Africa. It is distinctive in its appearance, with a long neck and legs, and can run at up to about 70 km/h (19 m/s; 43 mph), the fastest land speed of any bird. The Ostrich is the largest living species of bird and lays the largest eggs of any living bird.

There are four subspecies of Ostrich.

In 2014 molecular testing revealed that the Somali Ostrich (Struthio molybdophanes) was, in fact, a distinct species. It can be distinguished because the neck and thighs are grey-blue rather than pinkish-red. In mating season the male becomes a bright blue.

I regularly take small groups on private safaris to Africa, and we always see the ubiquitous Ostrich. If you would like more information about my safaris, check out my website, www.wildlifeworkshops.com
© 2021 Jeff Wendorff. All Rights Reserved. 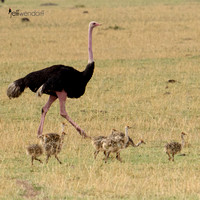 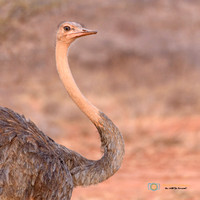