Hornbill Wiki
The hornbills (Bucerotidae) are a family of bird found in tropical and subtropical Africa, Asia and Melanesia. They are characterized by a long, down-curved bill which is frequently brightly colored and sometimes has a casque on the upper mandible. Both the common English and the scientific name of the family refer to the shape of the bill, "buceros" being "cow horn" in Greek. Hornbills are the only birds in which the first and second neck vertebrae (the atlas and axis respectively) are fused together; this probably provides a more stable platform for carrying the bill. The family is omnivorous, feeding on fruit and small animals. They are monogamous breeders nesting in natural cavities in trees and sometimes cliffs. A number of species of hornbill are threatened with extinction, mostly insular species with small ranges.

The most distinctive feature of the hornbills is the heavy bill, supported by powerful neck muscles as well as by the fused vertebrae. The large bill assists in fighting, preening, constructing the nest, and catching prey. A feature unique to the hornbills is the casque, a hollow structure that runs along the upper mandible. In some species it is barely perceptible and appears to serve no function beyond reinforcing the bill. In other species it is quite large, is reinforced with bone, and has openings between the hollow centre, allowing it to serve as a resonator for calls.
© 2021 Jeff Wendorff. All Rights Reserved. 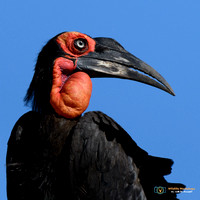