I hope you enjoy this gallery of Firefinches and Mannikins from my African Safaris.

Firefinch, Mannikin, Estridildae Wiki
The estrildid finches are small passerine birds of the Old World tropics and Australasia. They can be classified as the family Estrildidae (waxbills, munias and allies), or as a subfamily within the family Passeridae, which strictly defined comprises the Old World sparrows.

They are gregarious and often colonial seed eaters with short, thick, but pointed bills. They are all similar in structure and habits, but vary widely in plumage colours and patterns.

Collective Noun - Firefinches and Mannikins
There is no official collective noun for the Firefinch and so I have decided that torch should be used for a group of Firefinch. 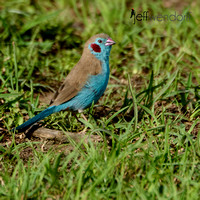