The Aplomado Falcon (Falco femoralis) is a medium-sized falcon of the Americas. The species' largest contiguous range is in South America, but not in the deep interior Amazon Basin. It was long known as Falco fusco-coerulescens or Falco fuscocaerulescens, but these names are now believed to refer to the Bat Falcon (F. rufigularis). Its resemblance in shape to the hobbies accounts for its old name Orange-chested Hobby.

Aplomado is an unusual Spanish word for "lead-colored", referring to the blue-grey areas of the plumage – an approximate English translation would be "leaden falcon".

The Peregrine Falcon (Falco peregrinus), also known as the Peregrine, and historically as the Duck Hawk in North America,is a widespread bird of prey in the family Falconidae. A large, crow-sized falcon, it has a blue-grey back, barred white underparts, and a black head and "moustache". As is typical of bird-eating raptors, Peregrine Falcons are sexually dimorphic, females being considerably larger than males. The Peregrine is renowned for its speed, reaching over 322 km/h (200 mph) during its characteristic hunting stoop (high speed dive), making it the fastest member of the animal kingdom. According to a National Geographic TV programme, the highest measured speed of a Peregrine Falcon is 389 km/h (242 mph).

A large falcon of the arid American West, the Prairie Falcon hunts medium-sized birds and mammals. It is about the size of a Peregrine Falcon or a crow, with an average length of 40 cm (16 in), wingspan of 1 metre (40 in), and weight of 720 g (1.6 lb). As in all falcons, females are noticeably bigger than males. 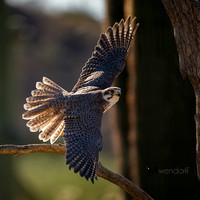