Eagle is the common name for many large birds of prey of the family Accipitridae. Eagles belong to several groups or genera, some of which are closely related. Most of the 60 species of eagles are from Eurasia and Africa. Outside this area, just 14 species can be found—2 in North America, 9 in Central and South America, and 3 in Australia. Eagle have the nickname "The King of All Birds."

Eagles are large, powerfully built birds of prey with heavy heads and beaks. Eagles' eyes are extremely powerful. It is estimated that the Martial Eagle has a visual acuity of nearly 4 times that of humans. The female of all known species of eagles is larger than the male.

A group of eagles can be called an Aerie, Congress, Convocation, Jubilee, Soar, or a Spread. None of these are incredibly satisfying. I propose that we add a Majesty to the list of collective nouns.

Check out my wildlife and nature workshops at Wildlife Workshops. You will find many workshops that feature A majesty of Eagles for you to photograph!
© 2021 Jeff Wendorff. All Rights Reserved. 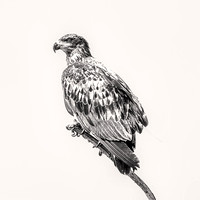 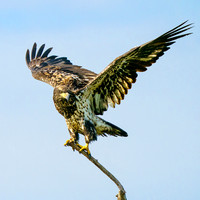 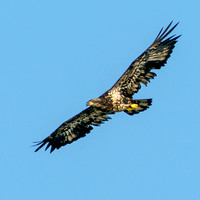