Jeff Wendorff's photography portfolio of Ducks in the family, Anatidae.

Ducks Wiki
The Anatidae is the biological family of birds that includes ducks, geese, and swans. The family has a cosmopolitan distribution, occurring on all the world's continents. These birds are adapted for swimming, floating on the water surface, and in some cases diving in shallow water. The family contains around 146 species in 40 genera.

Ducks are herbivorous and are monogamous breeders. Some species undertake annual migrations. A few species have been domesticated for agriculture, and many others are hunted for food and recreation. Five species have become extinct since 1600, and more are threatened with extinction.

The ducks, geese, and swans are small- to large-sized birds with a broad and elongated general body plan. Diving species vary from this in being rounder. Their wings are short and pointed and supported by strong muscles that generate rapid beats in flight. They typically have long necks, although this varies in degree between species. Duck legs are short, strong, and set far to the back of the body (more so in the more aquatic species), and have a leathery feel with a scaly texture. Combined with their body shape, this can make some species awkward on land, but they are stronger walkers than other marine and water birds such as grebes or petrels. They typically have webbed feet. Duck bills are made of soft keratin with a thin and sensitive layer of skin on top (which has a leathery feel when touched).

Their feathers are excellent at shedding water due to special oils. Many of the ducks display sexual dimorphism, with the males being more brightly colored than the females. Anatids are vocal birds, producing a range of quacks, honks, squeaks, and trumpeting sounds, depending on species; the female often has a deeper voice than the male.

Collective Noun Ducks
Well mercy me, there are at least 35 different collective nouns for a group of ducks. I think I am going to have to write a blog post about it! Here you are the collective nouns a badelynge of, a badling of, a battling of, a bed of, a brace of, a brood of, a bunch of, a coil of, a company of, a daggle of, a diving of, a dopping of, a flock of, a flight of, a flush of, a game of, a gathering of, a knob of, a leash (three) of, a little knob of, a lute of, a paddle of, a paddling of, a pair of, a plump of, a pryde of, a puddle of, a puddling of, a raft of, a safe of, a skein of, a smeath of, a sord of, a sorde of, a sore of, a sort of, a string of, a suce of, a sute of, a team of, a trip of, , a “V” formation of, a wabbling of, a waddling of, a wedge of

Photography Workshops and Tours
If you are feeling ducky, then I have the perfect bird photography workshop for you. Take wing over to Wildlife Workshops for the details.
© 2021 Jeff Wendorff. All Rights Reserved. 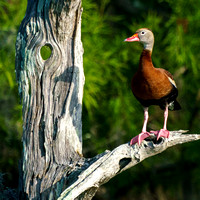