Jeff Wendorff's photography gallery of Cisticola from the family, Cisticolidae.

Cisticola Wiki
The Cisticolas are part of a family of small passerine birds is a group of about 110 warblers found mainly in warmer southern regions of the Old World. They are often included within the Old World warbler family Sylviidae.

This family probably originated in Africa, which has the majority of species, but there are representatives of the family across tropical Asia into Australasia, and one species, the zitting cisticola, even breeds in Europe.

Cisticola are generally very small birds of drab brown or grey appearance found in open country such as grassland or scrub. They are often difficult to see and many species are similar in appearance, so the song is often the best identification guide.

Collective Noun - Cisticola
No Surprise that I could not find and official collective noun. Given the difficulty in identifying these drab birds, I think annoyance should be their name.

Photography Workshops and Tours
I have photography workshops all over the planet and many of them include bird photography. Check out my website Wildlife Workshops for all of the details.
© 2021 Jeff Wendorff. All Rights Reserved. 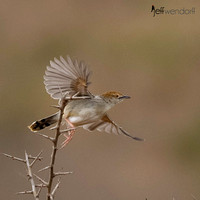