Cararcara Wiki
Caracara, also called carrion hawk, any of about 10 species of birds of prey of the New World subfamily Polyborinae (or Daptriinae) of the family Falconidae. Caracaras feed largely on carrion, birds, reptiles, and amphibians. Unlike the falcons in the same family, caracara are not fast-flying aerial hunters, but are comparatively slow and are often scavengers They are gregarious and aggressive. In spite of their smaller size, they dominate vultures when feeding.
Caracaras are recognized by their long legs and by the reddish naked skin of the cheeks and throat. They range in size from 40 to 60 cm (16 to 24 inches) long.

Crested Caracara
A tropical falcon version of a vulture, the Crested Caracara reaches the United States only in Arizona, Texas, and Florida. It is a bird of open country, where it often is seen at carrion with vultures. A common subject of folklore and legends throughout Central and South America, the Crested Caracara is sometimes referred to as the "Mexican Eagle." 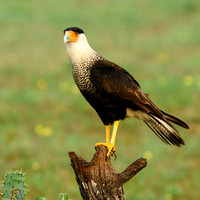 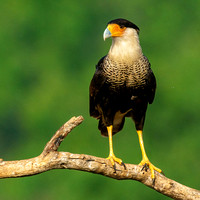 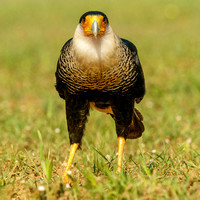