Jeff Wendorff's bird photography portfolio includes the American Bushtit.
The Bushtits or Long-tailed Tits,
Aegithalidae, are a family of small, drab passerine birds with moderately long tails. The family contains 11 species in four genera, the American Bushtit is the sole member in the Western Hemispere.

Bushtits are sprightly, social songbirds that twitter as they fly weakly between shrubs and thickets in western North America. Almost always found in lively flocks, they move constantly, often hanging upside down to pick at insects or spiders on the undersides of leaves. Flocks of Bushtits mix with similar small songbirds like warblers, chickadees, and kinglets while foraging. Bushtits weave a very unusual hanging nest, shaped like a soft pouch or sock, from moss, spider webs, and grasses.

The collective noun for a group of Bushtits is a cloud because of their social behaviors. I was thinkng that a society would be nice too. Since adult males often act as helpers for a nesting pair of Bushtits...

If you are interested in Wildlife, Nature and Creative Photography Workshops check out Wildlife Workshops and see what I've got going on.
© 2021 Jeff Wendorff. All Rights Reserved. 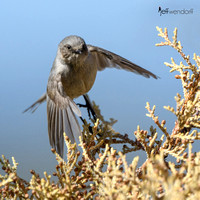