Jeff Wendorff's photography gallery of Antbirds from the family, Thamnophilidae.

Antbird Wiki
Antbirds are a large passerine bird family, Thamnophilidae, found across subtropical and tropical Central and South America, from Mexico to Argentina. There are more than 200 species, known variously as antshrikes, antwrens, antvireos, fire-eyes, bare-eyes and bushbirds. They are related to the antthrushes and antpittas (family Formicariidae), the tapaculos, the gnateaters and the ovenbirds. Despite some species' common names, this family is not closely related to the wrens, vireos or shrikes.

Antbirds are generally small birds with rounded wings and strong legs. They have mostly sombre grey, white, brown and rufous plumage, which is sexually dimorphic in pattern and colouring. Some species communicate warnings to rivals by exposing white feather patches on their backs or shoulders. Most have heavy bills, which in many species are hooked at the tip.
Most species live in forests, although a few are found in other habitats. Insects and other arthropods form the most important part of their diet, although small vertebrates are occasionally taken. Most species feed in the understory and midstory of the forest, although a few feed in the canopy and a few on the ground. Many join mixed-species feeding flocks, and a few species are core members. To various degrees, around eighteen species specialise in following columns of army ants to eat the small invertebrates flushed by the ants, and many others may feed in this way opportunistically.

Antbirds are monogamous, mate for life, and defend territories. They usually lay two eggs in a nest that is either suspended from branches or supported on a branch, stump, or mound on the ground. Both parents share the tasks of incubation and of brooding and feeding the nestlings. After fledging, each parent cares exclusively for one chick.

Collective Noun
I could not find an official collective noun for the antbird, so without all that much originality, I've picked a mound as the term for a group of antbirds.

Photography Workshops and Tours
I have photography workshops all over the planet and many of them include bird photography. Check out my website Wildlife Workshops for all of the details.
© 2021 Jeff Wendorff. All Rights Reserved. 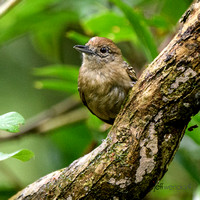