Jeff Wendorff's portfolio of Bat-eared Fox photography from the genus Otocyon. They are distantly related to the Red Fox.

The Bat-eared Fox (Otocyon megalotis) is a species of fox found on the African savanna, named for its radar-like ears. Surprisingly the primary purpose of their ears is to control their body temperature.

Bat-eared foxes are highly social animals. They often live in pairs or groups of up to 15 individuals. Individuals forage, play and rest together in a group, which helps in protection against predators.

We do occasionally see the Bat-eared Fox while on Safari, but is it pretty rare to see them in good light. I've found that when they have babies, they are most often to be seen out of the den. Always a good thing for a photographer. Be sure to check out my photography workshop site for details on my next Safari at Wildlife Workshops.
© 2021 Jeff Wendorff. All Rights Reserved. 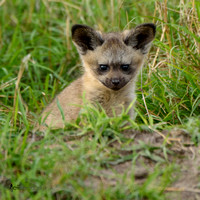