Marten Wiki
American Martens are widely distributed in northern forests across Canada and into Alaska. Only 200 years ago, they were also abundant in the southeastern United States. Smaller than the Fisher and larger than the Ermine, Martens areomnivores, including insects, fruits, and seeds as well as birds and small-to-medium-sized mammals in their diet. Martens most frequently hunt on the ground, but they are capable climbers, and will pursue Red Squirrels in trees. American Martens are solitary and territorial.

Collective Noun - Martens
The collective noun for a group of Martens is a richness. It refers to the practice of ancient nobility wearing their pelts.


Photography Workshops and Tours
The Marten is one of the many species that we photograph on my wildlife photography workshops. You can learn more about my workshops online at www.wildlifeworkshops.com.
© 2021 Jeff Wendorff. All Rights Reserved. 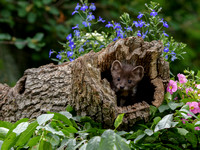