The American Badger (Taxidea taxus) is a North American badger, somewhat similar in appearance to the European Badger. It is found in the western and central United States, northern Mexico, and south-central Canada to certain areas of southwestern British Columbia.


American Badger habitat is typified by open grasslands with available prey (such as mice, squirrels, and groundhogs). The species prefers areas such as prairie regions with sandy loam soils where it can dig more easily for its prey.

The American Badger has most of the general characteristics common to badgers; with stocky and low-slung bodies with short, powerful legs, they are identifiable by their huge foreclaws that measure up to 2 in (5 cm) in length and distinctive head markings. Measuring generally between 60 to 75 cm (23.6 to 29.5 inches) in length, males of the species are slightly larger than females (with an average weight of roughly 7 kg (15.5 pounds) for females and up to almost 9 kg (19.8 pounds) for males).

The collective noun for a group of badgers is cete which isn't very colorful. Some quick research indicates that 1400-50; late Middle English, of obscure origin; perhaps variant of MiddleEnglish cite city, a usage suggested by similarity of Middle English forms for borough and burrow. Anyway, I'd like to propose a dig or a gruff as new collective noun for our badger friends!

The American Badger is one of the many species that we photograph on my wildlife photography workshops. You can learn more about my workshops online at www.wildlifeworkshops.com.
© 2021 Jeff Wendorff. All Rights Reserved. 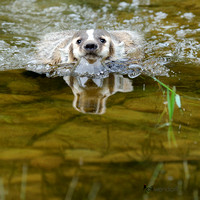